What is an Apple Galette?

Galette is a French term used to describe a dessert wrapped in pie crust (sort of). Especially in this recipe, we are placing apple slices in the center of a rolled-out piece of pie dough and then taking the excess and folding it inward to create an effortlessly beautiful dessert!

How is a galette easier than a regular pie?

I think the real question is how is it not?! But seriously, you’ll blow your own mind with the simplicity of making an apple galette. For starters, when making an apple galette you won’t have to go through the painful process of trying to get your pie crust to lay in the pie plate perfectly without tearing (a feat I have only accomplished a few times). Another wonderful perk of an apple galette is that it is simply impossible to make a soupy galette, unlike how easy it is to get a soupy pie. This is because 1) the apple is in a thin enough layer that no juice would get trapped at the bottom 2) because the galette has an open top all of the water will evaporate leaving a beautifully not-soupy galette! So lay back and enjoy a non-stressful apple pie replacement.

What you will need to accomplish the best apple galette

Looking for a cozy easy apple pie variation, allow me to introduce the apple galette! It's easy, delicious, and made to impress!

For the egg wash:

(you can use store-bought pie crust! If you are, skip this section)

This recipe makes enough for 2 pie crusts, for this recipe, you will only need half of the recipe yield, you can wrap and freeze the other half for up to 6 months. 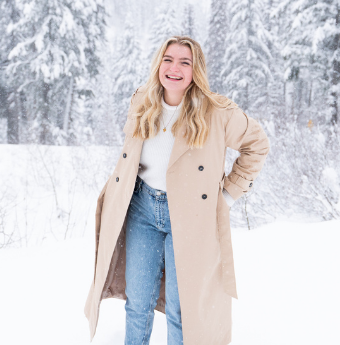 I’m so grateful you’re here! Have a look around at some of my favourite recipes and stay a while.

Get a fresh delivery of only the goods delivered to your inbox.

Thank you! Your submission has been received!
Oops! Something went wrong while submitting the form.

Thanks for contributing to our community! Your comment will appear shortly.
Oops! Something went wrong while submitting the form.
Be the first to comment on this recipe